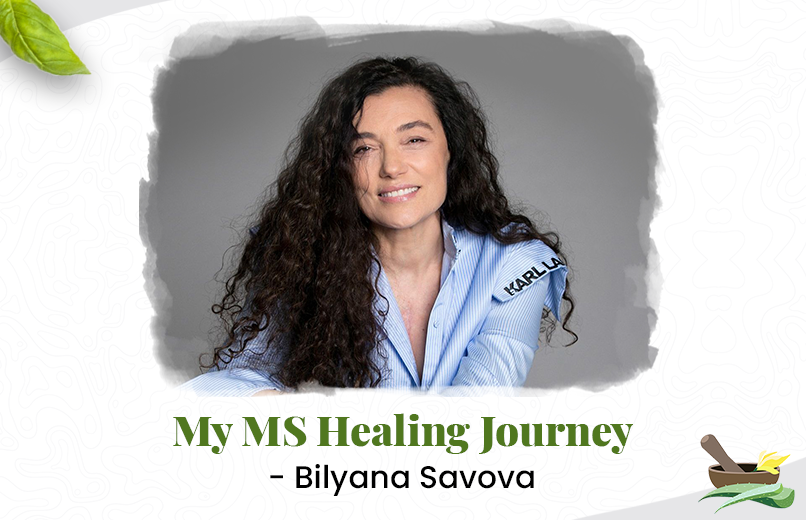 Fighting Multiple Sclerosis is a challenge many find hard. But we have people who fought the condition and have won phenomenally. Through this blog, we will get to know the inspiring story of Bilyana Savova, a strong woman from Bulgaria, who successfully fought Multiple Sclerosis with the help of Ayush Prana.

Bilyana is the owner of Plan2B Creative Studio, was the art director of EVA magazine for a long time and also has won woman of the year awards in the years 2016 and 2018. She is also the founder of MS Mora Cam, an organization that is focused to provide prevention, transformation, and genuine treatment for people diagnosed with multiple sclerosis. To co-fund their psychotherapy programs, rhythmic yoga and meditation practices, holistic body therapies, diet etc. under the tagline “I CAN DO IT AND KNOW HOW”. She is also the author of a bestseller in Bulgaria, “Nobody Leaves India Forever”.

For Bilyana, Multiple Sclerosis started with visual disturbances, severe body pain, and tingling in the arms, legs and face. On consulting, doctors to get an opinion about her condition, she was diagnosed with Multiple Sclerosis in 2008. This diagnosis upturned her life.  She tried every possible way to get rid of MS but failed in all her attempts. The doctors who treated her told her that in 2 years she would be in a wheelchair. This made her miserable and anxious about the condition. She was in denial of her condition and was confused more than ever.

After being diagnosed with Multiple Sclerosis, Bilyana embarked on a quest for a number of elements that were missing from her life at the time – balance, a positive attitude, the ability to identify and prioritize, and most importantly – mental and physical health.  She Intuitively felt that this illness came into her life as a result of certain imbalances that she needed to understand and overcome. Her life then was filled with confusion, fear and many unknowns, but there were a few things that were blatantly clear: two of which were the need to seriously change her lifestyle and the need for alternative medicine because traditional medicine can’t offer full recovery from her current condition. This made her start looking for other options and consulted with different specialists in the alternative medicine field.

In 2013, she finally met Dr. Prasanth Raghavan and his staff there at Ayush Prana. At her very first appointment with Dr. Prasanth, she got an idea of the potential root causes of the disease and her character flaws that feed them – workaholism, wanting to make things happen at all costs and her way, unhealthy diet, inability to kick back and relax, still live childhood traumas, hidden deep down in her that she didn’t allow to surface but played a role in her perceptions of the world and relationships. There were several concerns to resolve, but that did not frustrate her. On the contrary, these problems further motivated her, because for the first time she had the opportunity to go face to face with these and get help from a specialist.

Her 3 years course of PAMS Ayush Prana, ushered into a new period – a period of remission and stabilizing of the disease. She hasn’t had MS attacks since 2013 when she first went to Ayush Prana.

Bilyana’s Words – “Ayurveda and the PAMS therapy not only gave me a healthy body, but also taught me how to understand my body better”.