Rasmi lived in a small village with her family. They had to work really hard for the ends to meet. But they found happiness in their nest by bonding together. Rasmi had the responsibility of the entire house hold, being the elder sister in the family. It was a necessity for her to find a job as soon as possible, so she stopped her studies in the middle and joined in a near by company as a typist. Even though she wasn’t earning much, she could help her younger one to finish her studies, provide for the house. Soon the family found a groom for her and everything went like an Arabic fairy tale. 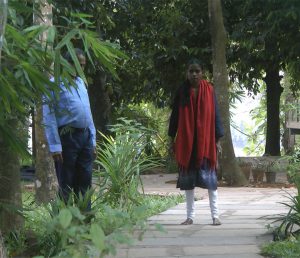 Destiny had something different in the bag for her. One day while she was typing suddenly the keyboard become invisible for her, there after everything around she fell into the deep pit of darkness. The wheel of her family stopped running. Rasmi got completely bedridden in the coming days. They got panicked without knowing what has happened. The girl was admitted to the nearby hospital and was on may injections, medicines etc. Days went by. Nothing changed except that they lost their family property on huge medical bills. The husband left Rasmi as she was not of much use for him. Hope was no where in the seen, one day Rashmi’s sister found a word called MULTIPLE SCLEROSIS in her report as she is the only educated remain at home. She googled about it to know further.

There the miraculous journey began. She found AYUSH PRANA and called up for help. The cry was heard by the Ayush Prana (Dr Prasanth). The hospital came forward in helping her and gave her all the medical care. Everything was through herbal therapy, nothing else was given to her than pure Ayurvedic herbs. They started their work on repairing her body. Rasmi started leaving the bed and making her steps. Vison was back and light of hope came back to her within an year.

Now she is living a happy, independent life with her family . The sky finally blue and bright clearing all the clouds.
Thanks to mother earth, its rich abundant herbal flora and the wisdom of Ayurveda.